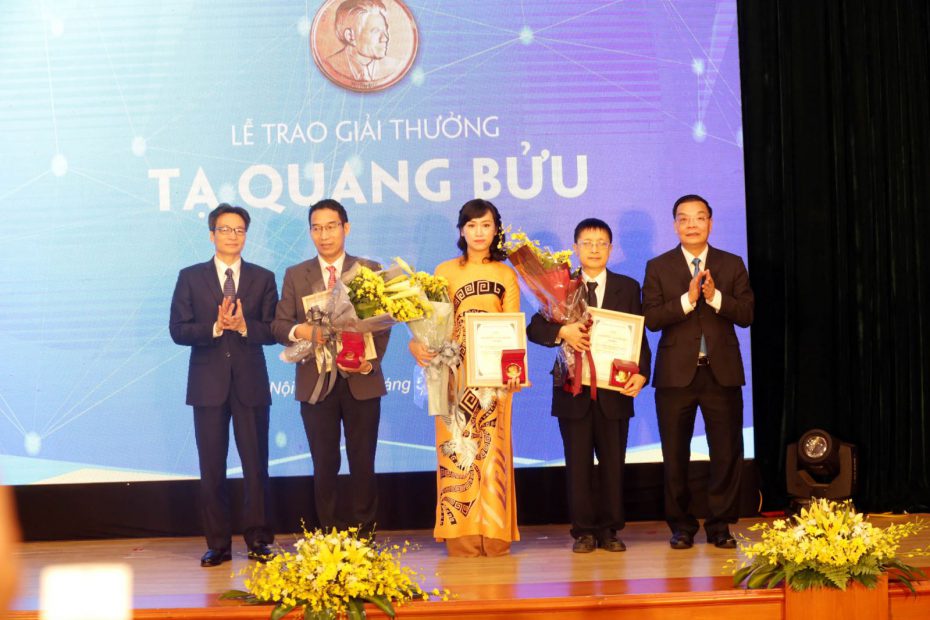 (HNM) – The Ta Quang Buu Prize in 2019 for the first time recognized that scientists in the field of mechanics and biomedical has won, and it has also been the first time a female scientist be honored. This is not only an occasion to honor scientific values, but also to encourage younger generation’s passion for scientific research, and to get attention of society in investing and building up a mechanism to support innovation, science and technology.

The scientific works have been done in Vietnam

Comment on the Prize this year, Prof. Dr. Ngo Viet Trung, President of the 2019 Ta Quang Buu Prize Committee 2019 said: For the members of the Committee, this is a difficult year for selection, because the candidates all have done the good works, which were published in top lists of specialized journals. Out of the eight nominated scientific works in Mathematics, Physics, Earth and environment sciences, Mechanics, Life sciences – Pharmacy and Medical, three scientific works – Assoc. Prof. Dr. Pham Duc Chinh, Assoc. Prof. Dr. Nguyen Le Khanh Hang and Dr. Le Trong Lu – have convinced the Award Committee by ensuring important criterias. These are excellent scientific works, conducted in Vietnam and published in prestigious international journals. The nominated author must be the most important contributor to that work, and that work requires at least two thirds of the Committee’s approval votes to be selected.

Assoc. Prof. Dr. Pham Duc Chinh (Institute of Mechanics – Vietnam Academy of Science and Technology) has persistent in pursuing research on shake-down and plastic collapse of structures for decades. His work on this area has been published in prestigious international scientific journals. He has been invited to write the chapters on the field for “Encyclopedia of Tribology” (Springer: NewYork, 2013), and “Encyclopedia of Continuum Mechanics” (Springer: Berlin, Heidelberg, forthcoming).  Two hypotheses given by Assoc. Prof. Dr. Pham Duc Chinh have contributed to the interpretation and settlement of the root of some conflicts that occur when applying shake-down and plastic collapse calculation in some specific problems.

Meanwhile, focussing on seasonal influenza virus, animal-to-human and emerging viruses, Assoc. Prof. Dr. Nguyen Le Khanh Hang (National Institute of Hygiene and Epidemiology – Ministry of Health) has also published numerous articles in prestigious international scientific journals. On this basic, the work of Assoc.Prof.Dr. Nguyen Le Khanh Hang provides a list of the mutations identified in human-animal interaction in HPAI H5N1 virus, valuable in virus molecular monitoring for future studies in Vietnam and in the world. The data can help scientists detect and identify mutations related to the adaptation of HPAI H5N1 influenza virus in mammals, and provide reference data for research on other influenza A viruses circulating in animals and poultry.

In another field, choosing the direction of nano research for his doctoral thesis since more than 10 years ago, and with the desire to use nanomaterials for health care purposes, Dr. Le Trong Lu (Institute of Technology tropical technology – Vietnam Academy of Science and Technology) has researched and designed a relatively simple synthesis process for nanoparticles from ferrite. The new finding of this synthesis method has brought a great significance in the manufacture of nanoparticles with many practical applications, especially in biomedical field.

The key is to pursue to the end

Minister of Science and Technology Chu Ngoc Anh said that the annual Ta Quang Buu Prize is not only an occasion to honor scientific values, but also to encourage younger generation’s passion for scientific research, and to get attention of society in investing and building up a mechanism to support innovation, science and technology. Minister Chu Ngoc Anh also directly pointed out that the industry is still facing many difficulties and challenges, starting from the inadequate awareness of sectors and localities to the complex, overlapping of the legal corridor and mechanism policies for science and technology.

In the common spirit towards improving mechanisms and policies for scientific research and technology development activities, the scientists who were awarded have given positive comments on the new points of current mechanism. In particular, many scientists compare the support came from the National Foundation for Science and Technology Development (NAFOSTED) as a bright spot amid the difficulties faced by scientists. According to Assoc. Prof. Nguyen Le Khanh Hang, with NAFOSTED ‘s mechanism, the research works are created from a transparent environment, equal opportunities for accessing research funding and towards international integration.

Associate Professor Pham Duc Chinh also affirmed that the basic research results and international publishes of Vietnam were lighted from the Ta Quang Buu era, and had conditions to burn up in the integration and progress era. All credit should go to the strongly reforming in science, technology and education policies, in which Nafosted is a bright torch.

Affirming the enthusiasm for basic research as well as the value of this field for the development of science and technology, Dr. Le Trong Lu said: “For me, choosing to what directions to do research does not have a great significance. The importance is following the passion and the pursuit of the chosen research direction till the end. Achieving scientific and technological goals for socio-economic development and making Vietnam a powerful country does require a stellar science and technology development strategy and non – stop effort by scientists, including myself. “