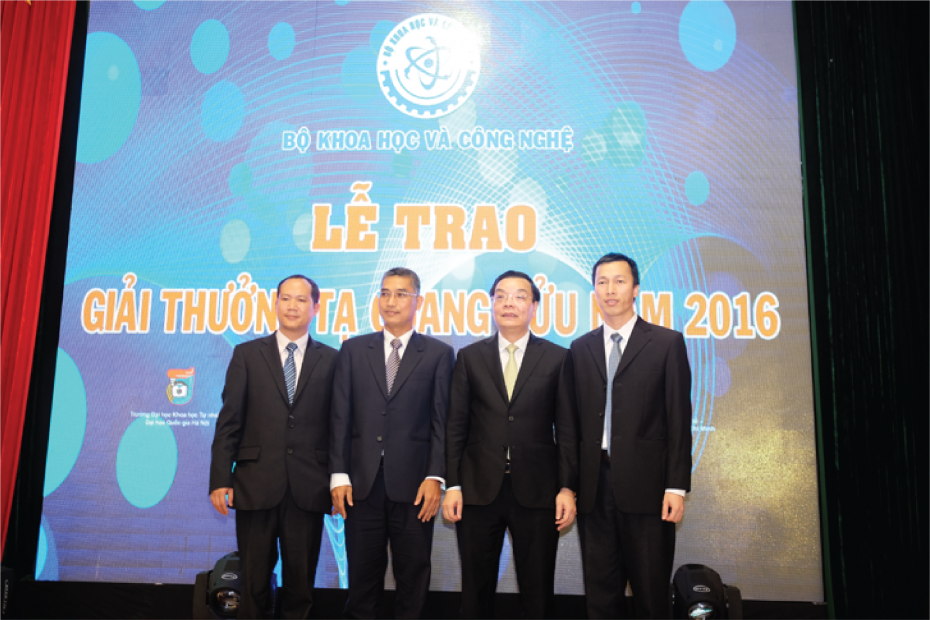 Prof. Dr. Nguyen Van Hieu said that “This prestigious Prize is not only an honor but also a new motivation for myself as well as for young scientists in Vietnam. It is a new source of inspiration and motivation for scientists, especially young scientists at Hanoi University of Technology in particular and at Vietnamese research institutes and universities in general. It continues to promote the publication of research results in ISI international journals, to bring Vietnam’s system of research institutes and universities reaching the level of leading prestigious universities in the region and the world. It is also my greatest desire when participated in this prize”. He also shared his thoughts about the difficulties that the empirical researchers in the field of Physical science and Materials science were facing “ It is very rare for people working in this field to receive this prestigious prize because it is very difficult for an empirical research result that has done in Vietnam got published on top notch journals. And it is even more difficult for the international scientific community to cite the empirical work that has done entirely in Vietnam”.

As the second scientist won the Main prizes, Assoc. Prof.  Dr. Nguyen Ngoc Minh mentioned the meaning of the award “It is a motivation for scientists to think about improving the quality of their publications.” According to Dr. Phung Van Dong, “Good lectures, outstanding scientific works, and building the strong research groups are what science community in our country needs”.

On behalf of the Prize Evaluation Committee, Prof. Dr. Dinh Dung, who also received the Ta Quang Buu Prize in 2015, affirmed that the selection process for the winning scientists was “rigorous, scientific, public and transparent. This is the only award that scientists play a decisive role in selecting… The scientific works were evaluated by the reputation of scientific journals, if the scientific works published in the top of hundreds of prestigious ISI journals in each specialty; and each work has top-notch result at international level”

Prof. Dr. Dinh Dung also commented that the prize – winning scientists are “the main authors of outstanding international level scientific works, published in in the top – notch of international scientific journals”. He said that this year’s Prize had three outstanding features: 1. Both of the Main Prizes belong to young scientists, and it helps to confirm that the opportunity to receive the Main prizes is the same for scientists; 2. The scientific works of the Prize – winning authors are “imbued with Vietnamese identity” and are funded and implemented within the framework of basic research carried out in the country; 3. The scientific works of the two Main prizes are in the field of empirical science, with great practical implications and applicability.

With the nomination was not in the shortlist of the Prize, he said that “all are very good scientific works of international stature. The scientific quality of the nominated authors in the South has also made great progress, especially the nominations for Young Scientist Prize”.  So, these are good signs of the prosperity of scientific research in Vietnam and promising to be able to receive new names in the Prize for the coming years.

According to Minister Chu Ngoc Anh, to enable Vietnamese scientists to participate in research and put research results into practical applications in socio-economic life, one of the vital factors is that the scientific managers have to maintain a transparent research environment as well as create more favorable conditions for them to research and collaborate with international scientists.