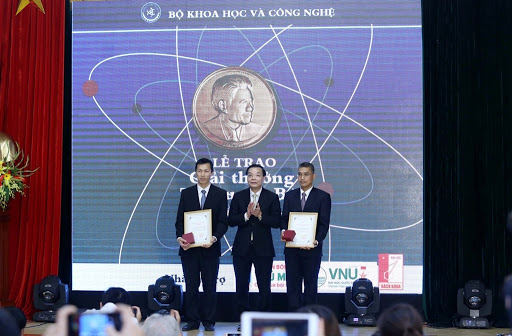 The first highlight of the 2016 Ta Quang Buu prize is that this year both of the main awards are from young scientists. That was different from previous years. This once again confirms that the opportunity to receive the prize is the same for the “senior” scientists who have a long experience in scientific research as well as young scientists.

The second highlight is the scientific works done by the prize – winning principal authors were all funded within the framework of basic research projects that carried out in the country. Especially the scientific works of Prof. Dr. Nguyen Van Hieu and Dr. Phung Van Dong that have co-authors are completely Vietnamese colleagues and completely done in Vietnam, without any foreign elements. In addition, these two works were cited many times since their publication: the scientific work of Prof. Dr. Nguyen Van Hieu (2012) was cited 69 times and Dr. Phung Van Dong (2013) was cited 19 times (excluding self quotes). This proves that these scientific works are very interesting for international colleagues and have a great influence on works in the same field of research.

The third highlight is the scientific works of the two Main Prizes, both in the field of empirical science, with great practical implications and applicability. The scientific work of Prof. Dr. Nguyen Van Hieu in the field of Materials Science (Physics) offers a new method of manufacturing secondary nano that can be expanded to be applied not only in nano-sensitive gas sensors, but also in many other fields such as nano electronic components, energy batteries. The scientific work of Assoc. Prof. Dr. Nguyen Ngoc Minh is in the field of Earth and Soil Science, studying the phytolith structure formed during the precipitation of silic in rice stalks, thereby proposing a straws treatment process to avoid environmental pollution and increase fertility for arable land, which can be applied on a large scale of the rice – growing plains.

In addition, the scientific work of Young Scientist Prize winner Dr. Phung Van Dong in the field of astronomy and high energy physics has got the high theoretical significance, contributing to the interpretation of the material and energy structure of the Universe, which developed and calibrated the existing 3-3-1 model of dark matter in the universe into a 3-3-1-1 model through the use of symmetrical properties.